Agra, part of India’s golden triangle, houses one of the most famous buildings in the world…which unfortunately decided to take a holiday when we visited.  Yes, it was arctic cold.  Yes, we went for sunrise.  No, we couldn’t really see the Taj Mahal.  Seriously.

We managed to make it to Agra without any internet.  I don’t know how people traveled before you could check out a few hostels online, scope out where the bus/train station is and calculate the rate for a tuk-tuk.  It’s like walking to school in the snow.  Miraculous.  But, we actually cheated because Ella’s boyfriend, Shell, acted as our personal on-call travel agent in those tough times without “the wifi.”  He found us a hotel, figured out where we were?! and told the tuk-tuk driver where to take us.  PS.  He’s a magician.

We had to sleep in all our clothes in Agra.  Hostels don’t have heat (WHY would you need it in India?!)  We decided it would be smart to get up for sunrise at the Taj Mahal.  Fewer people, beautiful lighting…  We walked down the street before the sun was up, stopped for a chai and warmed by the fire with the guards and their pups before we were brutally rejected from entering because Ella had her tripod (even though I had specifically read in the guide book that tripods were allowed). 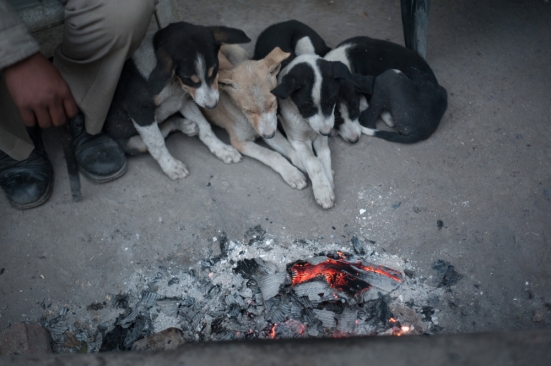 Once sorted, we entered the first gate…no Taj.  We crossed through the second gate…no Taj.  We knew it was in there, but somehow could not see a thing through the morning mist.  We had battled the elements to get there and were not rewarded by the views we were expecting, BUT, we did get a unique perspective that is not often shared (check google image).

After a few hours, our feet were frozen (even in socks with sandals, I’m embarrassed to say).  We took our final glimpse of the Taj and said our goodbyes, just as Ella used her body to block all traffic for a NON-tripod picture!