From Hanoi, we took an overnight cruise on Halong Bay.  Everyone who goes to Hanoi should take a trip to Halong.  A few hours away, it is an incredible combination of natural beauty and silence compared to the rushing motos and oncoming traffic of Hanoi.  We scoured town for the best deal, having to decide between a 2 or 3 day trip.  We ended up using Tony, at our hotel, because he had built such credibility with us and promised he was giving us the best deal on his “favorite” boat.  But, as we have learned, low expectations lead to pleasant surprises.

So we were impressed by the quality of the room when we boarded one of the many well-loved junk boats.  Classy.

We were also pleased by the amount of tasty food the chef prepared for us.

And by the beauty of Halong Bay despite the boat traffic jams and thick fog. 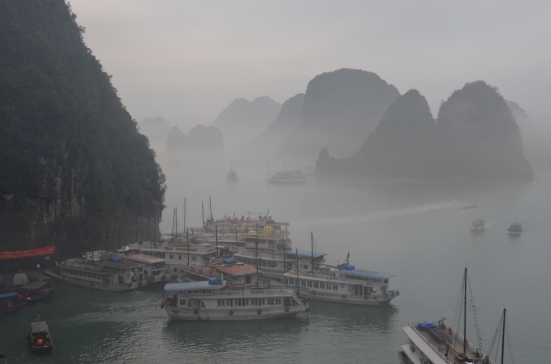 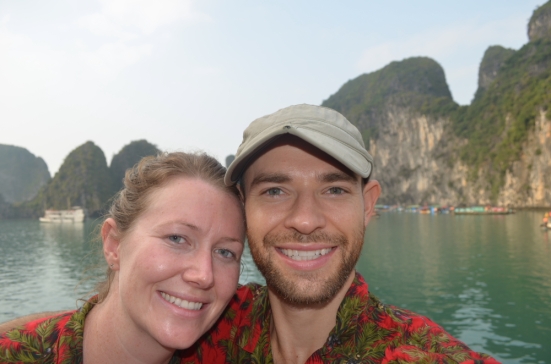 And the serenity of the sunset from the top deck.

And the hilarity of dancing to another passenger’s karaoke tunes. 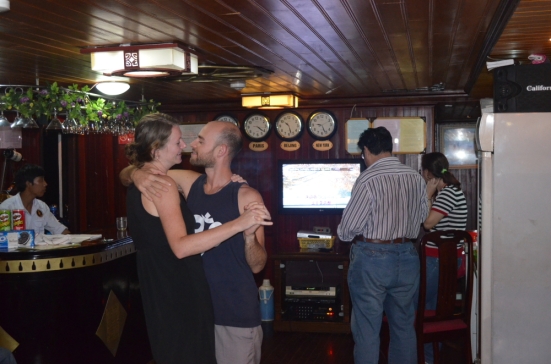 And the joke that is “squid fishing.” 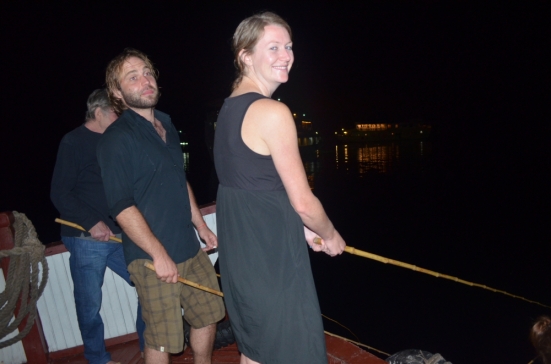 And the far-fetchedness of the rock names, like this one “Fighting Cock Rock.”

And when we found out we had paid more than some and less than others on the trip, we were pissed.  It almost ruined the experience, and we were mad at Tony for tricking us into believing him.  But, it’s Vietnam and people want to make money.  So instead of sulking, we approached Tony about our disappointment and he immediately rectified the situation and honored the lower prices when we got back to his hotel.  We were impressed by how he handled it, and our relationship has continued to blossom!

The only draw back to Halong Bay was the fact Joshua lost his sunglasses in the Bay.  He jumped back onto the boat from a kayak, and they flew off his head and sank to the bottom of the ocean much like the necklace in Titanic–painfully slow.  So we watched as the only pair of real Ray-Bans in SouthEast Asia claimed a stake in history as a part of Halong Bay.  They had made it so far on the trip (he actually bought them for a Halloween costume in 2008–see our Mission Bike Messenger costumes below), but now a piece of us lives on at this World Heritage Site.