Our “easy 18 hour” bus ride (which actually took 27) back to Thailand was the worst.  We skipped the 2-3 day boat trip in favor of getting to Chiang Mai quickly–I had a friend living there and we wanted to spend as much time with her as possible.  So instead of a chill but long MeKong River cruise, we took a miserable but long bus ride that took us to the border of China and back to the Huay Xai crossing at the edge of Laos.  I sat next to Joshua in a seat made for someone under 5 feet tall.  The kicker was around 4 hours into the ride when we stopped and picked up 8-10 more passengers even though every seat was full.  They handed out little plastic stools made for kindergarteners and pretty soon our row of 4 had become a row of 5.  Probably because I was nicer looking than the traveler next to me, the elder gentleman who took the seat next to me decided to lean my direction.  As he swayed in the aisle while trying to catch a few zzz, his head would bob against my should just frequently enough to keep me alert or his hand would fall uncomfortably into my lap (hopefully it was unintentional groping).  Needless to say, it woke me up every time and I didn’t get a wink of sleep until he disembarked the bus around 4am.

From there we were rightfully worried about the onward travel.  We should’ve expected but, everything we had been told about the bus trip was not true.  It was not 18 hours.  It was not the same bus for the entire journey.  It did not depart at 6pm.  It was NOT VIP.  It was not looking good for the boat border crossing, tuk-tuk to Chiang Khong and onward bus to Chiang Mai.  But in the end, the trip was unfortunately front loaded with disaster and the remainder was simple except we had to scramble to cancel a cooking class we had booked in Chiang Mai that same evening because we were arriving soooo much later than we had planned.  And it was somewhat hilarious, as well, to arrive in Chiang Mai, start walking away from the bus station towards town, get caught in a tropical downpour and have to stand under an overhang only to realize we were at a much farther bus station than we were originally told and 20 baht ($0.65) would still get us relatively close to our hostel.

We had an epiphany in Chiang Mai.  When massages were so cheap, why hadn’t we been getting them everyday?  So we made it a rule…at least one massage a day.  We sometimes had three.  There is nothing better than a 30-60 minute $3 head, neck and shoulder massage before bed.  The only time, I would say this wasn’t true, was when we got massages at the women’s prison.  They run a massage facility (nothing like transferable skills!).  Joshua’s masseuse was sweet and demure.  Mine was a beast.  She never stopped talking about the customers with her comrades.  She had an evil laugh and tattoos on her neck, wrists and hands…probably in for murder.  She was so strong she left bruises on my arms, legs and back.  I told her I liked hard massages, and I would guess she was trying to make me take it back…I’m sure of it!  So I let her beat me up, complained about it later to Joshua and had several bruises to show for it.

We also got to visit my good friend Jenny, who had been living in Bali/Thailand for a few months.  It was absolutely wonderful to see a familiar face, not to have the same traveler conversation over and over and to get to catch up over Thai food and yoga classes.  I have to admit that I love Joshua for many reasons, but girl talk and gossip are just not his specialty.  With Jenny we were able to splurge on amazing vegetarian buffets and night market extravaganzas while discussing our “re-enter the world” plan. 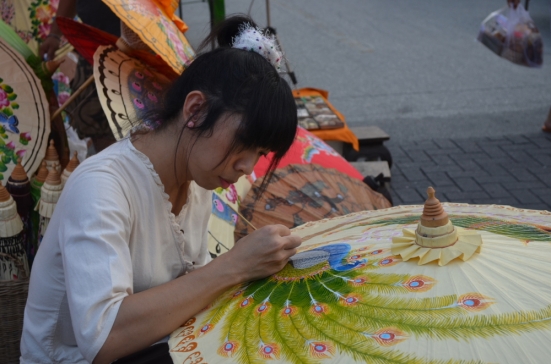 In between our 3-hour massage sessions and social events, we were able to attend a great little cooking class with Thai Cottage Cooking School.  Run by two sisters, it turned out to be just perfect for us.  Somehow we ended up with a private lesson that included a better than average market tour with plenty of time to taste ingredients and ask questions.  Because there were just two of us, we were able to knock it out in about two hours compared to most classes that require 4 hours if not a whole day.  Plus after the first two courses, we were too full and were able to take the other two courses home to eat the following day. 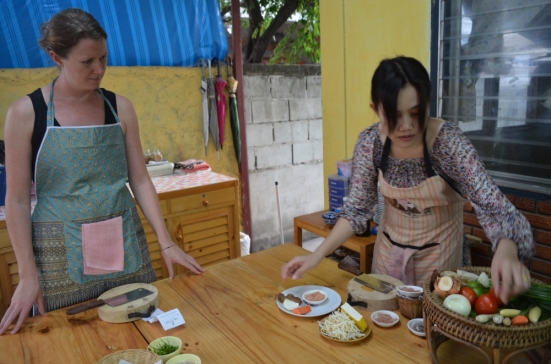 Joshua escaped one morning for a Muay Thai Kickboxing lesson.  Our hostel, Diva Guesthouse, organized the private lesson.  Joshua was picked up on a motor scooter at 8AM by the instructor and taken to a gym surrounded by auto body shops.  It felt about as real as it could get.  He changed into traditional attire, had his hands and toes taped and was then rubbed down with tiger balm from head to toe…literally.  What required the oil down?  Unfortunately the language barrier ensured that question will never be answered.  Needless to say, Joshua described it as a lot of tingling for his nether-region.  After 3 hours of training and micro-fractures throughout his legs and feet, he decided that a second lesson would not be advisable.  Either way, I think he enjoyed it.

We also found time to explore some temples, although…we’re kind of templed out.

One thing that stood out were the inspiring quotes hanging in the garden of Wat Phra Sing.

Nothing like a little Buddhist simplicity to put everything into perspective.  The multi-day hikes and elephant rides were not as appealing as they once were.  Probably a sign that we need to hit the reset button and open our minds again for the remainder of the trip.

One thought on “Thailand: Chiang Mai”