The first thing we noticed on our bus ride from Siem Reap to Phnom Penh was how many Cambodians must have a sensitivity to motion sickness.  They all smell these little sniffers…sit with them stuck up their noses…because the menthol flavor is supposed to help with nausea and dizziness.  It was even more apparent when our bus stopped for a bathroom break and more than three women ran off the bus to puke in the grass…some of them popped a squat AND puked at the same time.  Luckily their long skirts allow them to pee without having to find a bush to hide behind.

We spent our first evening in town at the Foreign Correspondents Club, drinking real cocktails and enjoying views of the Tonle Sap River.  What brought us there, you ask?  Well, we had heard it was the place that news writers chose to phone in their stories during the Vietnam war.  As of this writing (and a little research), we’ve found that it opened in 1993 and the only writing that happened occurred during the Pol Pot/Khmer Rouge of the the ’90s.  Either way, they have an amazing happy hour with some delicious strawberry mojitos and passion fruit caiproskis (or the other way around…can’t remember) and a great view of the river.

The Royal Palace in Bangkok was breathtaking, so when Joshua heard that Phnom Penh had one that included a silver pagoda consisting of 5,000 silver 1kg tiles he was giddy in anticipation.  With the current price of silver, Joshua had already calculated the value of the floor in US dollars and hatched a plan for export.  We arrived to another story.  The Royal Palace was closed due to the passing of the king in October, so the silver pagoda was pretty much the only thing available for viewing.  That would have been enough had 80% of the floor not been covered by carpet, the remaining tiles not loosely duct-taped together and none of it available for photography.  After such a disappointment, we barely cared to pay attention to the 90kg gold buddha in the room.

One of the problems with spontaneous travel (and being American) is that wenever have enough time (or previous background knowledge) to learn about the history of the developing countries we have visited.  Case in point, Cambodia.  There was a HORRIBLE genocide led by Pol Pot and the Khmer Rouge from the ’70s until the late ’90s that ultimately destroyed a generation of education and development of the country, not to mention thousands (if not millions) of lives.  Maybe it’s our age, maybe it’s our ignorance…but either way, it was all new to us.  To get a better understanding of what happened, we visited the S-21 prison camp.

Keep in mind this prison camp was formerly an elementary school converted for the sole purpose of torturing (and murdering) prisoners and forcing confessions for treason. 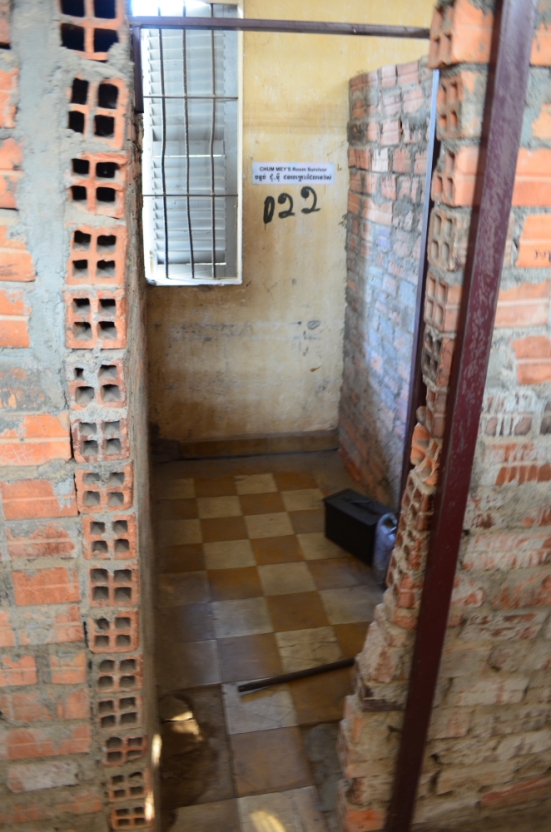 We originally planned to visit the Killing Fields following our tour of S-21, but after speaking with one of the remaining handful of S-21 survivors, we realized we had seen all we could handle for one day.  The story was now more confusing than ever (why did this happen, who sponsored it, why didn’t anyone step in?) and I knew the answer wasn’t going to be a simple one.

To be honest, I did not expect the Khmer Rouge to be the focus of our visit to Phnom Penh.  There was another, underlying reason why we made it a point to stop.  A 6th grade class from New Mexico brought us here.  And with their advice we squeezed in a tour of the Mekong. 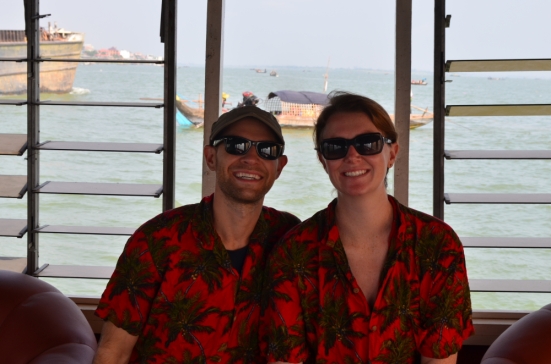 Phnom Penh has been called the “Pearl of Asia.”  Others have said that it is like Bangkok was before it became touristy…authentic Southeast Asia with a touch of French charm and edgy appeal.  For us, it provided a small taste of Western comfort, cheap rooms and an intriguing past.  I don’t know if I’d rank it as a must-see in Southeast Asia, but I know I’ll be reading about their troubled history after this visit.

The fact they eat such crazy sh@t means they have definitely had an interesting past, right?!

One thought on “Cambodia: Phnom Penh”