Getting to Siem Reap was exhausting, but the town itself was WAY cuter than I ever imagined.  It’s touristy…like filled with restaurants, bars, shops, etc. and people who visited 5-10 years ago probably would not recognize it.  They closed the streets to traffic, so at the end of each day tourists could wander from dinner to drinks to dessert to massages to markets.  It was lively, clean and friendly.  Joshua and I found it easy to like.

We stayed at a great guesthouse on the edge of the action that had all the luxury we needed to spend a few days exploring the ancient temples of the Angkor Archaeological Park.

We rented bikes for $1/day and rode the 6km to the entrance of the park on our first day.

We bought fancy 3 day passes with our pictures on them (which you have to show everywhere and my picture was UGLY, dang).  We decided to skip Angkor Wat to see some of the other temples (and not ruin everything by seeing the most famous one first).  We took a ride to Bayon (which ended up being my favorite).  It’s full of huge carved heads that face different cardinal directions that Joshua took advantage of for photos.

We stopped at most of the other temples in the Angkor Thom kingdom before biking out the Victory Gate and along the “extended route.”  After climbing to the top of too many temples up stairs that could have challenged any gym machine at level 10, I was beat.  I can’t remember exactly what I was asking Joshua in the picture below, but a winning guess would be, “Is it worth it?”  Between the bike riding and the stair climbing, my butt and legs were jello. 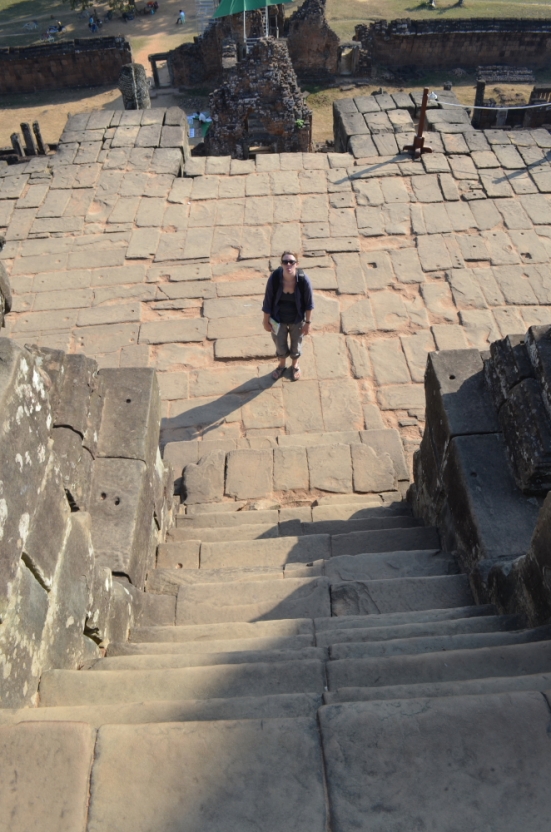 All we could do for sunset was sip two beers from the outside gates of Angkor Wat…nothing more…except we still had to ride home.  Boo.

The stop was much needed as our butts were SO sore from riding hard-seated bikes around all day.  If we could have fit the bikes in a tuk-tuk I probably would have paid a fortune for a ride home.

Finishing a sweaty, hot, dusty day of exploring with a nice shower, a delicious banana shake and our new favorite dish, Amok, could be the best recovery…oh wait, add to that a fish massage (which I’ve never wanted to do, but only cost $2 for 20 minutes and came with a beer) and a foot massage and a back massage for $1. 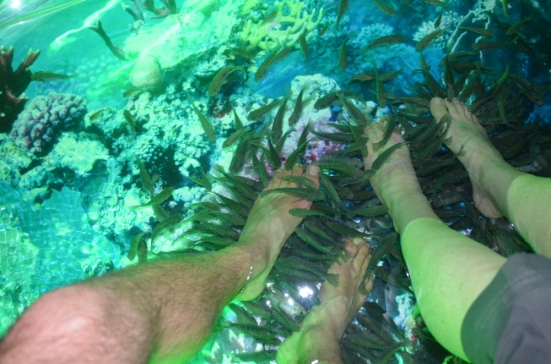 Of course, I made Joshua get one too!

We followed up the sensation of really hungry fish eating dead particles off our feet with an amazing 30 minute foot/back massage while viewing a great documentary of Angkor on a big screen (so we got educated too)!  I decided to skip the OPI pedicure they were offering for $3, but we did indulge in two new pairs of eyeglasses and an eye exam for $36 (which were ready in 1 hour!).  Seriously, I’m not sure why people ever leave Siem Reap.

We made a bold decision and did not wake up at 4:30am to see the sunrise at Angkor Wat because Joshua decided the sun rise angle wouldn’t be good for pictures anyway and the last few sunrises we have gotten up for have been lame.  We heard it depends on the season at Angkor (and people who went were mighty tired and terribly disappointed).  Instead, we rented bikes with cushy seats and saw a few more temples on our list, most of which had really old trees growing around them, cute little ladies lighting incense in them or were the setting for “famous” movies like Tomb Raider. 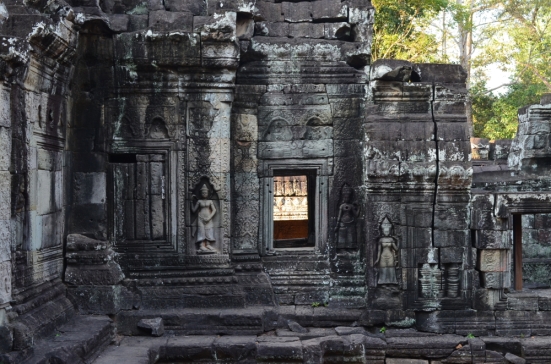 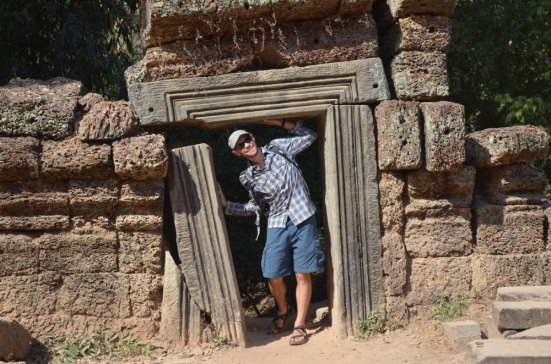 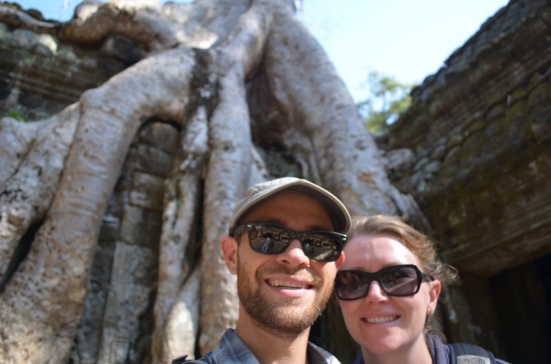 We finished the day with the big momma, Angkor Wat.

Yeah, Angkor Wat, the 8th wonder of the world.

We saved this temple for last for a reason.  From the outside there was not a lot to see except for the huge moat surrounding it.  We learned the temple is floating on top of water, and there is a special system in place so it doesn’t rise up and down with the changes in water volume from rainy to dry season.  The entrance adds a lot of drama because you can’t see much of the wat until you’ve walked through several passageways.  Once inside the compound we could glimpse the iconic image in its entirety.  But, it wasn’t just the stupas that were impressive.  The inside wall of the first floor surrounding the inner wat is covered in reliefs depicting scenes from battle, images of heaven/hell and other stories important to the Khmers.  Most people rush to the top, so we had a lot of the magnificent art to ourselves. 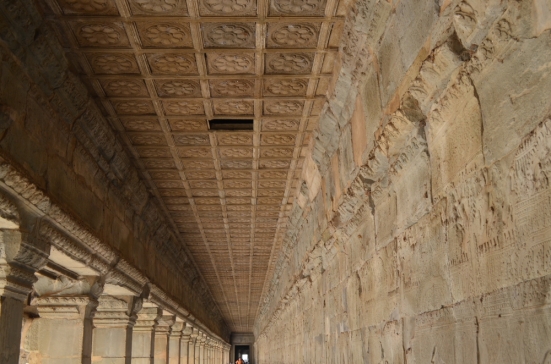 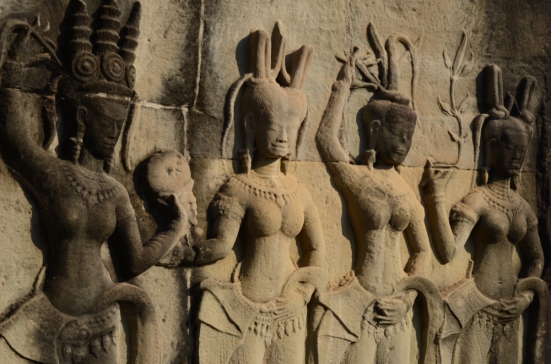 From the top, it was almost anti-climatic because we couldn’t see the detail of the beauty that was so apparent with a walk around the bottom level.  Any future temple we see will have to do a lot to compete with Angkor Wat meaning it will take a lot for us to pay to see another.

Sometimes we find travelers who want to be the first to discover something new and cool.  Angkor Wat is not that place.  It is packed with tourists…more in a small area than we have seen in months in India.  But, there is also a reason a place becomes touristy…usually it has something spectacular to share, a total beauty.  Angkor Wat is that place.  I’m comfortable traveling to sites where someone else has forged the trail and we can find plenty of guesthouses and competing restaurants selling good food and cheap beer if the end result is a trip to a place like Angkor.  The new and developing town of Siem Reap has become quite a haven for visitors to this ancient temple.

And there is a charm in Cambodia that results from the juxtaposition of young and old.

One thought on “Cambodia: Siem Reap”