To date we have never done anything as purposefully stupid as cage diving with Great White Sharks…which is why we immediately signed up for an opportunity with “Shark Lady” when we pulled into Hermanus in the dark of the night.  If it’s this outfit was good enough for Brad Pitt and Prince William, then it’s good enough for me.

For just about $100, we got a day filled with sharks (coinciding perfectly with Shark Week in the States).  It started with a short drive to Gansbaai, an area known for its Great White action.  Lance, our shark expert, gave us the history and goal of the operation…to better understand these misunderstood creatures.  We took a boat, along with 18 other fools, to “Shark Alley.” 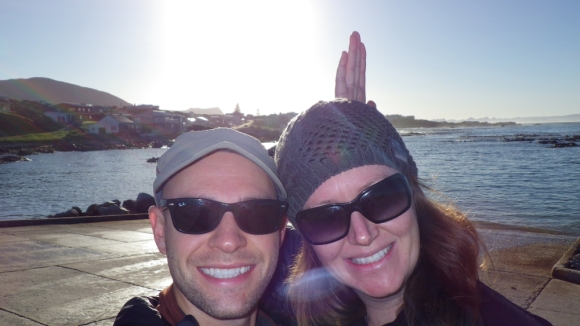 Once there, the crew made a soup of rotten tuna and water, the smell of which would travel through the current to attract the sharks.  It was barely needed since before we even set down anchor, we could see the shadows of sharks circling the boat.  Lance said that most of the sharks that we see out here are new, meaning they may never have seen a boat before.  So we were as “fresh meat” as they were!

They immediately got the 8 foot long by 2.5 foot wide cage ready.  It floated next to the boat, about a foot of which was above water.  Once in our wetsuits, 4 people were loaded into the cage, right up next to each other, shoulder to shoulder.

The bait was set!  On a side note, we opted to be in the second group, just in case. 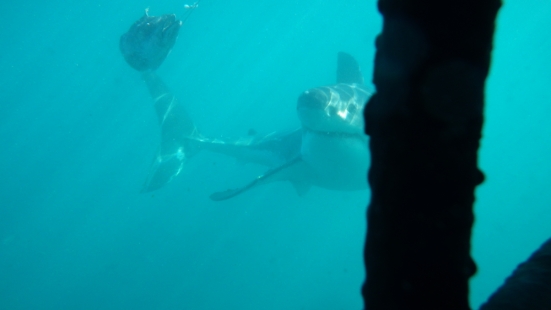 On Lance’s call, either left or right but always down, those in the cage would push themselves under the water to watch the passing shark(s).  Usually the shark was interested in the tuna head that Lance used as a visual cue for the sharks to make sense of the chum smell.  They would lunge after the tuna head, launching themselves out of the water and past the cage (sometimes knocking into it).

Other times, the sharks would swim slowly by the cage, definitely within an arm’s reach, although we were instructed to keep all body parts inside and for good reason!  The sharks were so close you could see the scratches on their faces from wrestling/playing/eating seals.  Some were as long as 10+ feet. 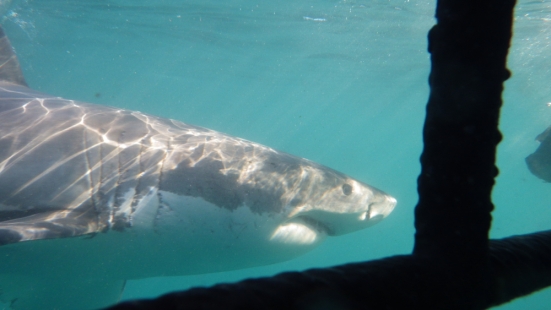 We saw two separate sharks that had been tagged by the Discovery Channel for a shark show they are airing.  To tag them we found out they have to hook the shark, drag it around for 30 minutes to tire it out, pull it on board the boat, drill a hole into the fin and inset the tracker.  These trackers allow people to see where the sharks travel on google earth.  Sadly, it is also allowing poachers to follow the sharks’ movements and hunt them easily.  I was so confused why something like that was legal—apparently the Discovery Channel has paid the South African government for the right.  Since they started, per our guide,  they have tagged 48 sharks and killed one.

I thought I would be far more frightened of the shark cage experience.  Truly, it was beautiful.  To watch the sharks swim by, so gracefully, made it feel more like a real world aquarium.  Because you knew you were going to see sharks and you wanted to, it was different than feeling something brush your leg in the ocean…for me.  The sharks showed no signs of aggression towards us in the cage.  They barely seemed to notice us watching them.

In all, we saw 10 separate Great Whites during our morning in the water.

Afterwards, we sat in Hermanus Bay to come down from our high.  Hermanus is famous for having the best land-based whale watching in the world.  As we chatted about the sharks, we commented that neither of us had ever really seen a whale.  A few moments later, within a few hundred meters from the shore, we saw a whale emerge from the water and blow air from its blowhole.  Then this same whale started rolling around, lifting up its flippers and diving back under the water.  Soon there were others doing the same thing.  The “Whale Caller of Hermanus” was up to his eyeballs in business.  There were whales everywhere and every few minutes they would put on a show. 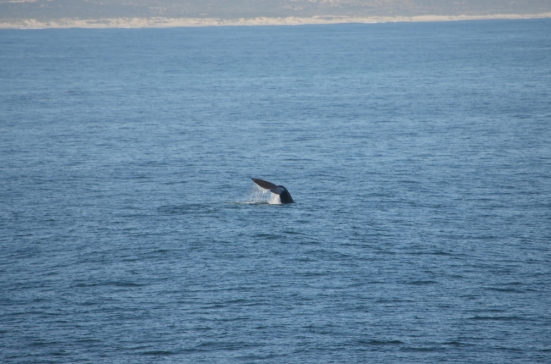 After filling ourselves with aquatic sealife, we continued down the Garden Route to Cape Alguhas, the southernmost tip of Africa (a definite accomplishment).  We made sure to test the water where the Indian Ocean (warm) and Atlantic Ocean (cold) meet. 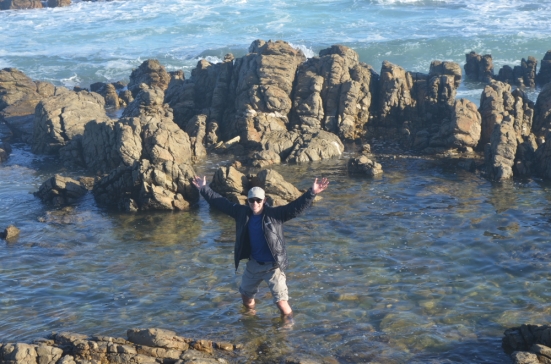 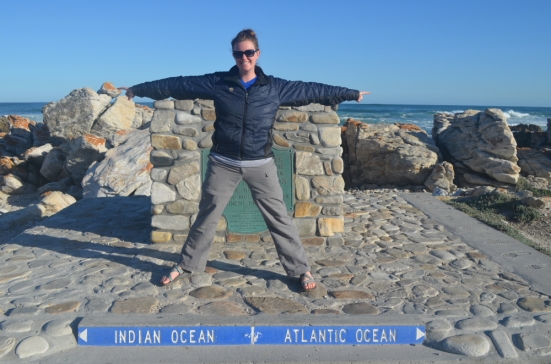 We pulled into Mossel Bay after dark, whipped up a dinner of yogurt and granola, to power up for another day full of activities.