Shhhh, don’t tell San Francisco, but I’ve fallen in love with another city—Rome.  We were ready to leave South America, but not ready for the spell that Rome cast on us.  It was just supposed to be a layover that we extended for a few nights, and now, I think it’s getting serious.  We rented a designer apartment near Piazza Navona that put us in the center of all the action.

We quickly turned on vacation mode which for us meant we ate three healthy (as in sizable) meals a day, consumed ice cream at least once and drank as much wine as possible.  In Rome, we found it hard to eat poorly.  Every restaurant was great: fresh pasta, homemade pizza, even the house wine.  No restaurant would be able to last in Rome without making food the way “mama” did.  We enjoyed recipes passed from generation to generation with much appreciation for real Italian food.  We sampled gelato flavors across Rome to compare flavor, texture and taste.  The size my belly grew can be measured in inches.

The best part about Rome for us was arguably the food, but the next was the fact that you could turn down an alley in the city and there was a high likelihood that something important happened there.

The history and culture surrounding even the local gelato store made things feel special.  Already overwhelmed with the city and knowing we only had three days to explore, we went ahead and sprung for the Rome Card (a Disneyland-like fast pass) which allowed us to skip the lines at both the Forum and Colosseum.  We started at the Forum, taking our hosts’ Blue Guide as a reference.  Joshua led us back in time past Julius Cesar’s grave and the heart of ancient Rome.  We spent the morning soaking up our surroundings, trying to catch a glimpse of what Rome was like before hordes of tourists descended upon it each summer.  I’ve never seen SO many fancy cameras.  Even 10 year old tourist children were taking photos with them. 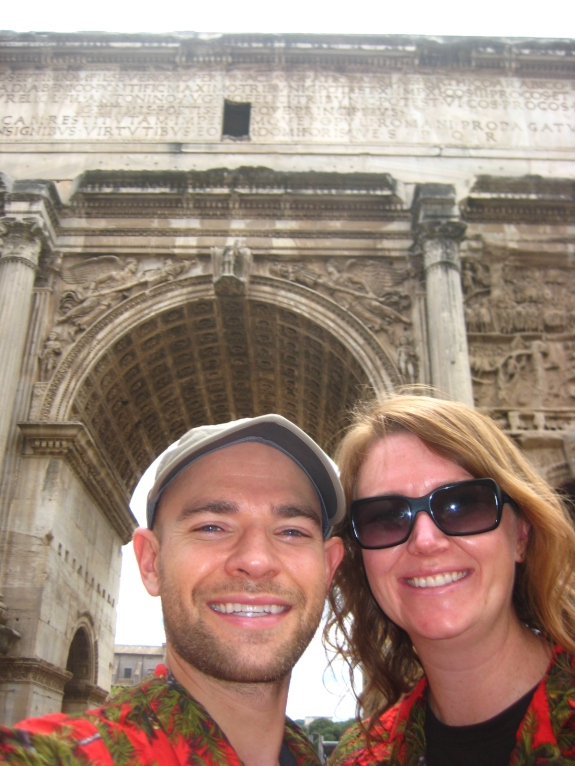 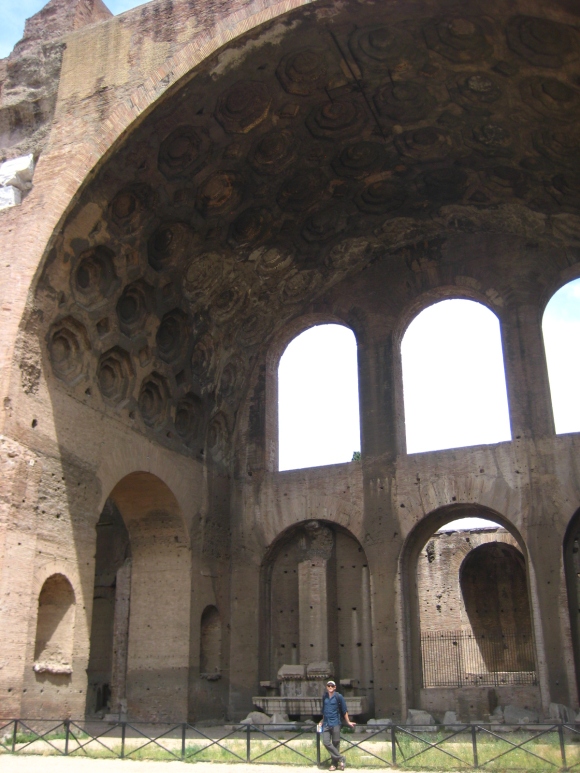 The Colosseum was exactly what Joshua was hoping for—a real life scene from Gladiator (his favorite movie).  Its floor was built to include hatches that could reveal new obstacles, animals and warriors at any time during the “show.”  The sand covering the wooden stage was meant to soak up the blood.  As gruesome as its typical entertainment may have been, the stadium was well designed for its use.

We continued our self-guided tour at the Pantheon, located just a few blocks from our apartment.  The Pantheon opened our eyes to the drama hidden in Rome: the feud between Raphael and Michaelangelo, the contrasting wishes of successive popes and Bernini—you either love him or hate him, but he’s impossible to ignore. 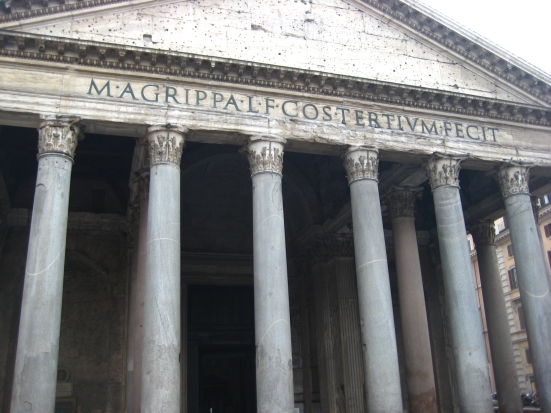 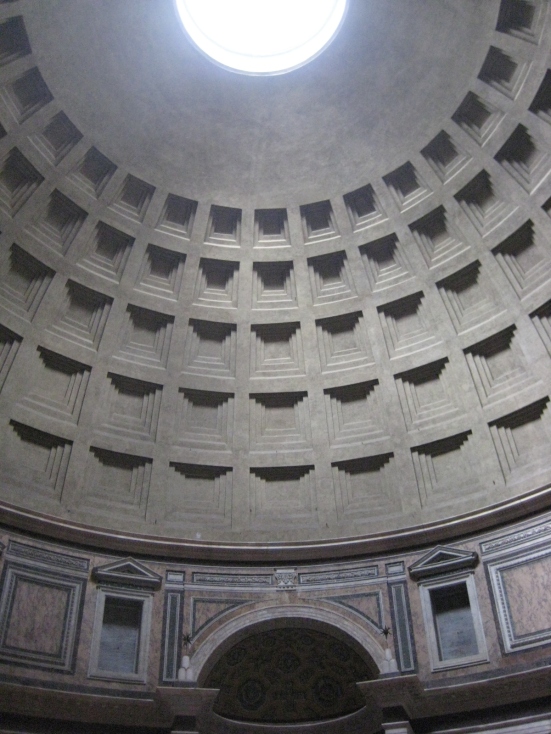 We passed the Trevi Fountain en route to the Spanish steps, so we made our wishes and threw in a coin for our eventual return to Rome. 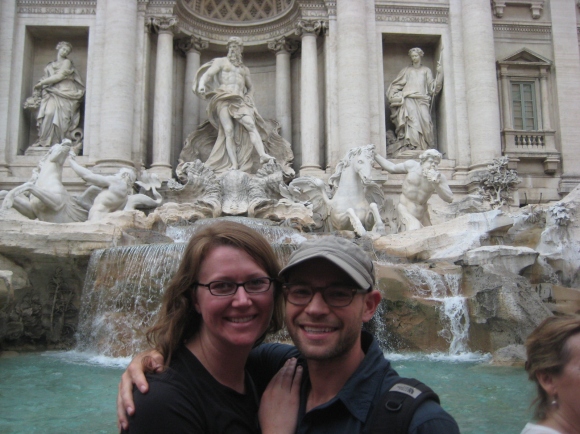 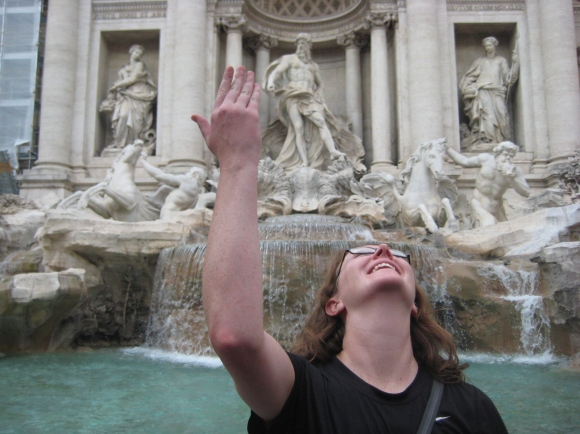 As the sun went down at the Spanish Steps, we shared the scene with other tourists appreciating the bustling action of the city. 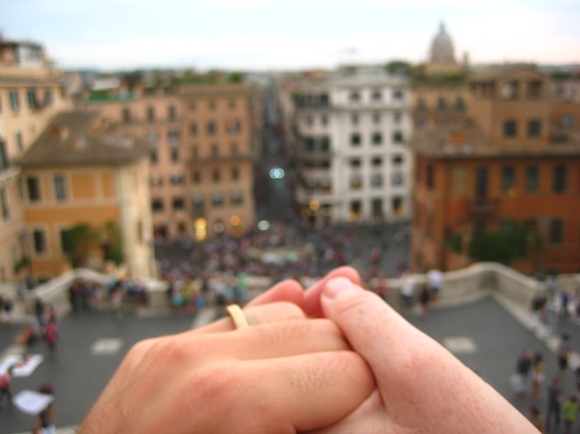 We spent another day walking through the Jewish ghetto of the city and taking a tour of the synagogue that remains in the area.  It is a demonstration of efficiency.  When Rome regulated the Jews, they were allowed one synagogue, but with several groups practicing, the synagogue actually houses 5 schools under the same roof.  Just across the river, we meandered through the Travesterre neighborhood, full of shops and restaurants on our way to St. Peter’s Basilica.  Even though it was late in the day, we found out it was the perfect time to visit.  The crowds were mostly gone.  The late afternoon light coming through the windows shown down in a very angelic way.  When we climbed to the top of the dome, the 5pm service had started, so we got to listen to the most beautiful chanting and hymns from above. 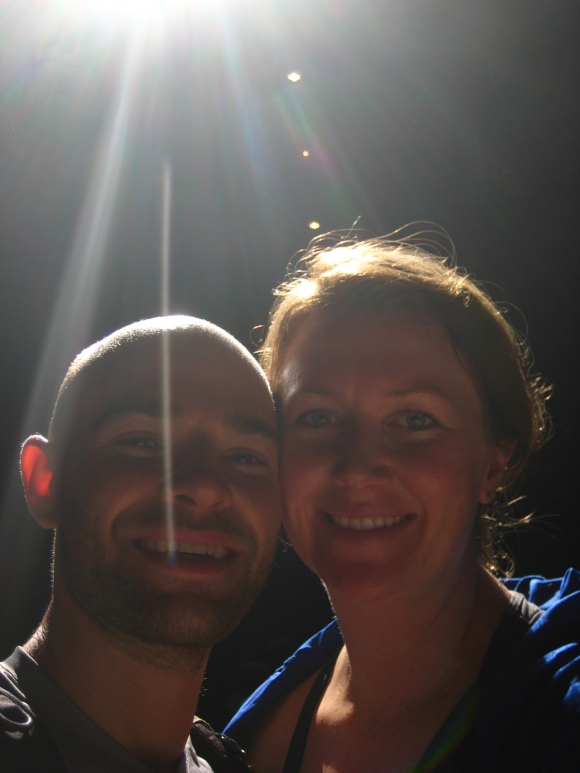 We made our plans to come back to the Vatican early the next morning.  We used our Blue Guide to move through the museum, which provided information on every room far beyond our comprehension.  The construction of the hallways of the Vatican is elaborate, and each room is dedicated fully to its contents, so we enjoyed an overall feeling of awe while being there.

We traveled the maze to the Sistine Chapel where, in silence, we stared at the ceiling.  I took a picture (bad girl!) But, I couldn’t help it!

Even the stairs leaving were artistic. 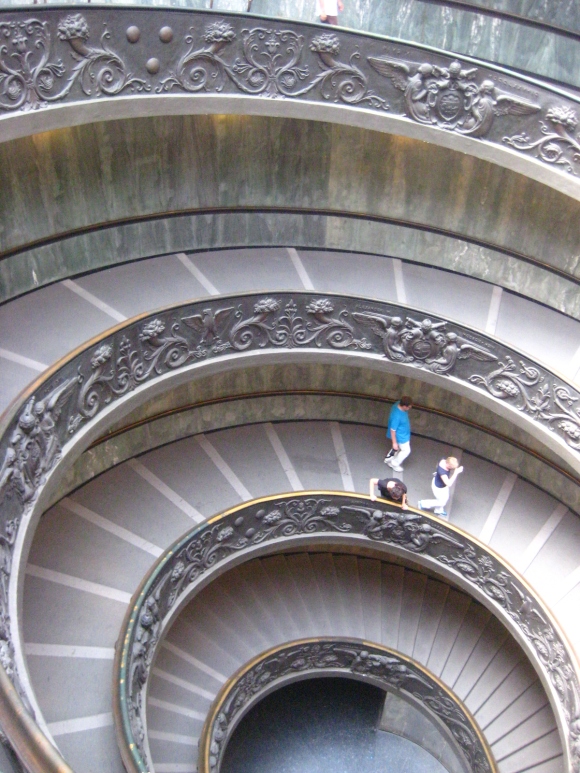 Our host, Tommy, recommended one final stop for us in Rome, the Capuchin Crypt.  This odd work of art is composed of human bones (actually dead friars from the monk order) that have been organized into patterns and nailed to the walls or stacked in piles.  Each room has a completely new theme and decoration–hip bone, clavicle, hip bone in one room and femur, ankle, femur in another.  Even the light fixtures are made from human bones.  It’s half disgusting and half the most creative idea I’ve ever seen.  In the museum leading up to it, the information hinted that the monk who designed the rooms may have been a little obsessive…

We tried to leave Rome undone…only spending a few hours each day seeing the sights.  We spent the rest eating, shopping and generally enjoying our surroundings.  We plan to come back, if only for the fresh flowing water the you can drink from the streets that made Joshua so incredibly happy (after spending the last 6 months drinking through a filter).  I’m so excited we’ve finally found this city, filled with fashion, food, entertainment and culture.  But I can’t help but wonder, how are we just visiting for the first time?!  And, what are the immigration laws?